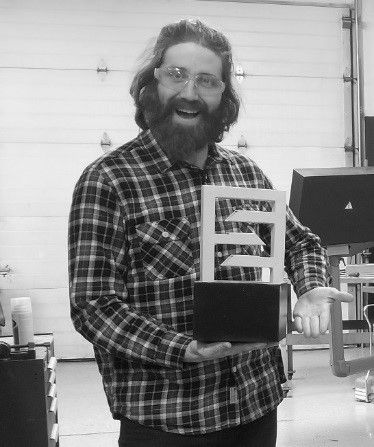 Like every JARC trainee, Brendan came to the Jane Addams Resource Corporation (JARC) looking for a second chance.

Raised in Elmhurst and residing in Chicago, Brendan, age 33, felt confined to a life working in the service industry. “Restaurants don’t check records,” he said. “They’re pretty forgiving with people who struggle with addiction, too.”

But he wasn’t making enough to support his girlfriend or his 10-year-old son whom he sees twice a week. He said he wasn’t living paycheck to paycheck; he was living night to night. He knew something had to change. He didn’t want to rely on other people financially any more.

“My lifestyle took a toll on my family relationships,” he said. The first thing he did was stop drinking and smoking marijuana. “I’ve been clean for six months.” Then one of his friends, a JARC graduate, urged him to apply to JARC. He entered JARC’s welding program with some previous experience. An eager student, Brendan completed welding training and got his AWS certification in just six weeks. He pushed himself to learn three types of welding – TIG, MIG and Stick.

“Brendan’s charisma and dedication was infectious,” said Lauren Svedman, his welding instructor. “He even began a study group that met before class to prepare for the AWS verbal exam. I was impressed by Brendan’s initiative and positivity as he mentored new trainees, ensured that metal was cut and stocked, and that everything was running smoothly on the shop floor. These qualities earned him the title of Welding Shift Supervisor and the respect of his peers.”

Brendan rides his bike 45 minutes to JARC’s training center. On bad-weather days, he is grateful JARC provides a pre-paid card for public transportation. He took advantage of JARC’s other support services – financial education, resume writing, help applying for Medicaid, and free legal aid to expunge and seal two convictions from seven years ago.

Brendan recalls during his first week at JARC how another trainee offered him advice that made all the difference in his welding skills. Only a few weeks later, Brendan was named Shop Lead and expected to do the same for newer trainees. “My favorite thing about JARC is the tremendous support you get from your classmates and the staff. We’ve all been through hard times. We’re all trying to better ourselves.”

His main goal is stability. “I want to learn and progress so someday I’ll work as a fabricator. But first I hope to get into the Pipefitters Union for the benefit of my family and my future.” Brendan looks forward to the stability of a welding career, with health benefits and a pension. “I spent my life waiting for a change. I’m thankful to JARC every day. This program is set up for success. Put your heart into it and you will succeed.”

On May 7, Brendan was honored as Trainee of the Month for his consistent reliability and leadership. On May 13, 2019, Brendan started his new position as an assembler at Skender with a starting wage of $22/hour. When asked how things are going, Brendan excitedly replied, “I’m learning a lot, and production of units starts next week!” Through the workforce training, CWF services, and hard work, Brendan’s future looks completely different from before he came through JARC’s doors.